With an impressive five productions playing in London’s Theatreland this summer, there’s nothing hotter than an Andrew Lloyd Webber musical. 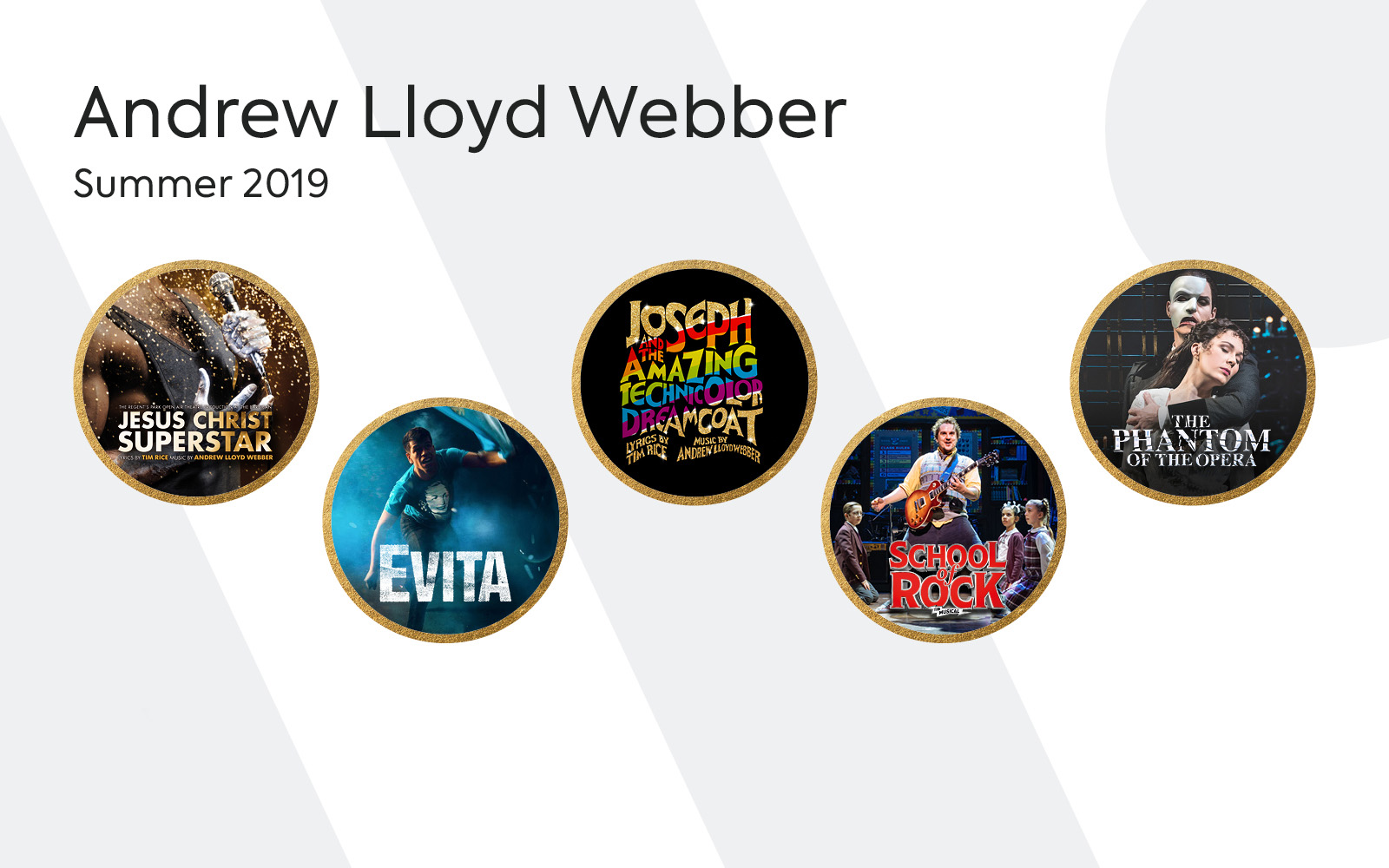 In 2017 Andrew Lloyd Webber became the only person to equal Rodgers & Hammerstein’s record, set in 1953, of having four Broadway shows running concurrently.

Now this summer 2019, London is set to raise the bar even higher, as a total of five Andrew Lloyd Webber musicals will be staged across London theatres – The Phantom of the Opera, School of Rock, Joseph and the Amazing Technicolor Dreamcoat, Jesus Christ Superstar, and Evita.

Another cause for celebration is LW Theatres – newly renamed in his honour in 2018 – celebrates its 1st Birthday in July. There’s never been a better time for musical theatre fans than the Summer of ALW.

1. Joseph And The Amazing Technicolor Dreamcoat

For Joseph’s 50th Anniversary year, the iconic musical will be reimagined in a brand new production, starring Sheridan Smith, Joseph alum Jason Donovan and Jac Yarrow, who will don the coat of many colours in the title role. With music by Andrew Lloyd Webber, Joseph was first released as a concept album in 1969 before becoming an audience stage favourite, with classic songs like “Any Dream Will Do”, “Joseph’s Coat”, “Jacob and Sons”, and “Go, Go, Go Joseph”.

2. The Phantom of the Opera

Where? Her Majesty’s Theatre
When? Currently booking through 4 April 2020

Known as “The Brilliant Original” for a reason – now in its 33rd year, Phantom first opened at Her Majesty’s in 1986 and has since been performed more than 13,500 times. Lovingly tended to and staged in its original, opulent scale, the production still boasts a 27-piece orchestra for every performance. With music by Andrew Lloyd Webber, who also co-wrote the book, Phantom is one of the longest-running shows in the world, spawning both a sequel and film, with many of its songs recorded by a variety of popular artists.

Where? Gillian Lynne Theatre
When? Currently booking through 5 Jan 2020

Continuing the storied tradition of rock musicals, Andrew Lloyd Webber’s most recent family musical is based on the Hollywood film starring Jack Black. A failed rock musician imitates a substitute teacher and recruits his class to join him to compete in The Battle of the Bands. With a talented cast of youngsters playing instruments live on stage each night, the production has been a champion of music education, with Lloyd Webber even granting schools free licensing rights. Long may the spirit of rock live on in future generations.

Andrew Lloyd Webber’s rock opera depicts the final week in the life of Jesus and his disciples. Beginning as a concept album, it first came to life on Broadway in 1971, before transferring to the West End and becoming one of the most enduring musicals of its time. After two critically and publicly acclaimed sell-out seasons, this contemporary Olivier award-winning production returns to the London for a strictly limited summer season.

From multi-award winning musical to Oscar-winning film, Evita is an icon of stage, screen and 20th century history. Based on the life of former Argentine First Lady Eva Peron, the sweeping “Don’t Cry For Me Argentina” is yet another Andrew Lloyd Webber song that transcends the genre of musical theatre to the popular canon. Jamie Lloyd directs this brand new production under the stars this summer at the Open Air Theatre in Regent’s Park.

Who knows what the next Andrew Lloyd Webber musical is in the pipeline? But musical theatre fans still have so much to look forward to.

In Feb 2019 it was announced that a film adaptation of Andrew Lloyd Webber’s Sunset Boulevard would begin in Oct 2019, directed by Rob Ashford and starring Glenn Close – who’s starred as Norma Desmond in the original Broadway production, and later returned to the role for the West End and Broadway revivals.

The promoter is: LW Theatres.

The prize draw is open to residents of the United Kingdom aged 16 years or over except employees of LW Theatres and their close relatives and anyone otherwise connected with the organisation or judging of the competition.

There is no entry fee and no purchase necessary to enter this competition.

By entering this competition, an entrant is indicating their agreement to be bound by these terms and conditions.

Route to entry for the draw and details of how to enter are available here: https://lwtheatres.co.uk/summer-of-andrew-lloyd-webber/

Only one entry will be accepted per person. Multiple entries from the same person will be disqualified.

No responsibility can be accepted for entries not received for whatever reason.

The winner will be randomly chosen by LW Theatres and announced via the LW channels no more than 14 days after the competition closes.

The prize consists of:

Two tickets to see Joseph and the Amazing Techincolor Dreamcoat at The London Palladium between 12 August – 8 September, excluding Saturday evenings.

Two tickets to see School of Rock at the Gillian Lynne Theatre between 12 August 2019 – 5 January 2020, Monday-Friday performances only, during non-school holiday periods.

Two tickets to see The Phantom of the Opera at Her Majesty’s Theatre between 3 September  – 3 October, for any Tuesday to Thursday performance, excluding schools and public holidays.

The winner agrees to use of their image for publicity purposes for LW Theatres.

Tickets are subject to availability.

Ticket location is subject to Promoter’s or producer’s discretion.

The prize cannot be exchanged for cash or any other product.

All other expenses associated with the prize such as transport to and from the venue, food and drink shall be the responsibility of the winner and not the Promoter.