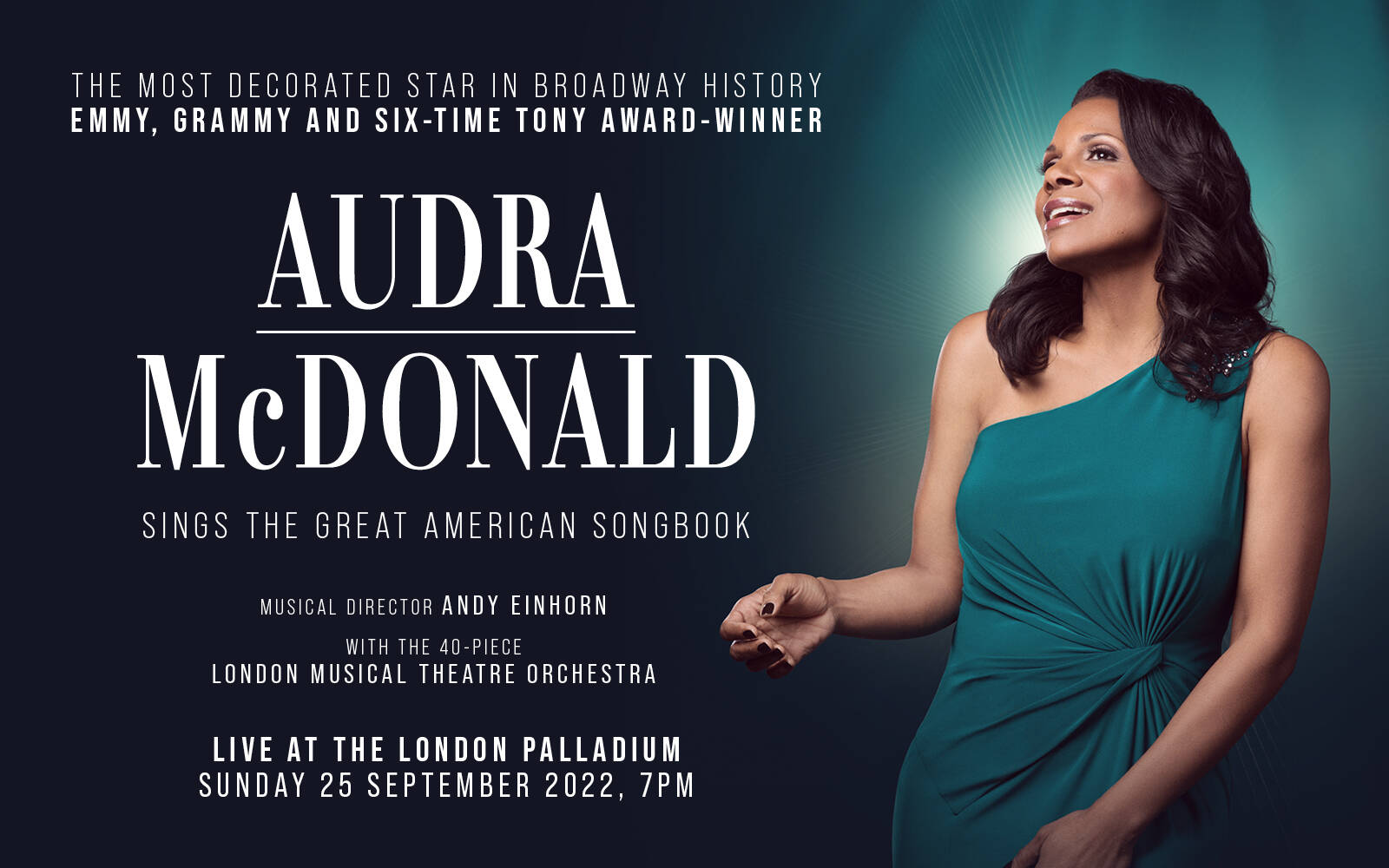 Celebrate an evening with Emmy, Grammy, and six-time Tony Award winner, Audra McDonald, at The London Palladium. Alongside Andy Einhorn and the London Musical Theatre Orchestra, Audra will take you through the Great American Songbook and Broadway’s greatest hits.

Audra McDonald is unparalleled in the breadth and versatility of her artistry as both a singer and an actor. The winner of a record-breaking six Tony Awards, two Grammy Awards and an Emmy, in 2015 she was named one of Time magazine’s 100 most influential people and received a National Medal of Arts—America’s highest honor for achievement in the field—from President Barack Obama. In addition to her Tony-winning performances in Carousel, Master Class, Ragtime, A Raisin in the Sun, The Gershwins’ Porgy and Bess and Lady Day at Emerson’s Bar & Grill—the role that also served as the vehicle for her Olivier Award-nominated 2017 debut in London’s West End—she has appeared on Broadway in The Secret Garden; Marie Christine (Tony nomination); Henry IV; 110 in the Shade (Tony nomination); Shuffle Along, or, The Making of the Musical Sensation of 1921 and All That Followed; and Frankie and Johnny in the Clair de Lune (Tony nomination). A Juilliard-trained soprano, her opera credits include La voix humaine and Send at Houston Grand Opera, and Rise and Fall of the City of Mahagonny at Los Angeles Opera, where the resulting recording earned her two Grammy Awards.

On television, Audra has been seen by millions as the Mother Abbess in NBC’s The Sound of Music Live! and played Dr. Naomi Bennett on ABC’s Private Practice. She won an Emmy Award for her role as host of PBS’s Live From Lincoln Center and has received nominations for Wit, A Raisin in the Sun and Lady Day at Emerson’s Bar & Grill. Having first appeared as Liz Lawrence on CBS’s The Good Wife, she can now be seen in The Good Fight on Paramount+ as well as in Spectrum’s pandemic-themed drama, The Bite. On film, she has appeared in Seven Servants, The Object of My Affection, Cradle Will Rock, It Runs in the Family, The Best Thief in the World, She Got Problems, Rampart, Ricki and the Flash, Disney’s live-action Beauty and the Beast, the movie-musical Hello Again, and MGM’s Aretha Franklin biopic, Respect. McDonald has issued five solo albums on the Nonesuch label as well as Sing Happy with the New York Philharmonic on Decca Gold. She also maintains a major career as a concert artist, regularly appearing on the great stages of the world and with leading international orchestras. A founding member of Black Theatre United, board member of Covenant House International, and prominent advocate for LGBTQAI+ rights, her favorite roles are those performed offstage, as an activist, wife to actor Will Swenson, and mother.