Panto returns to The London Palladium 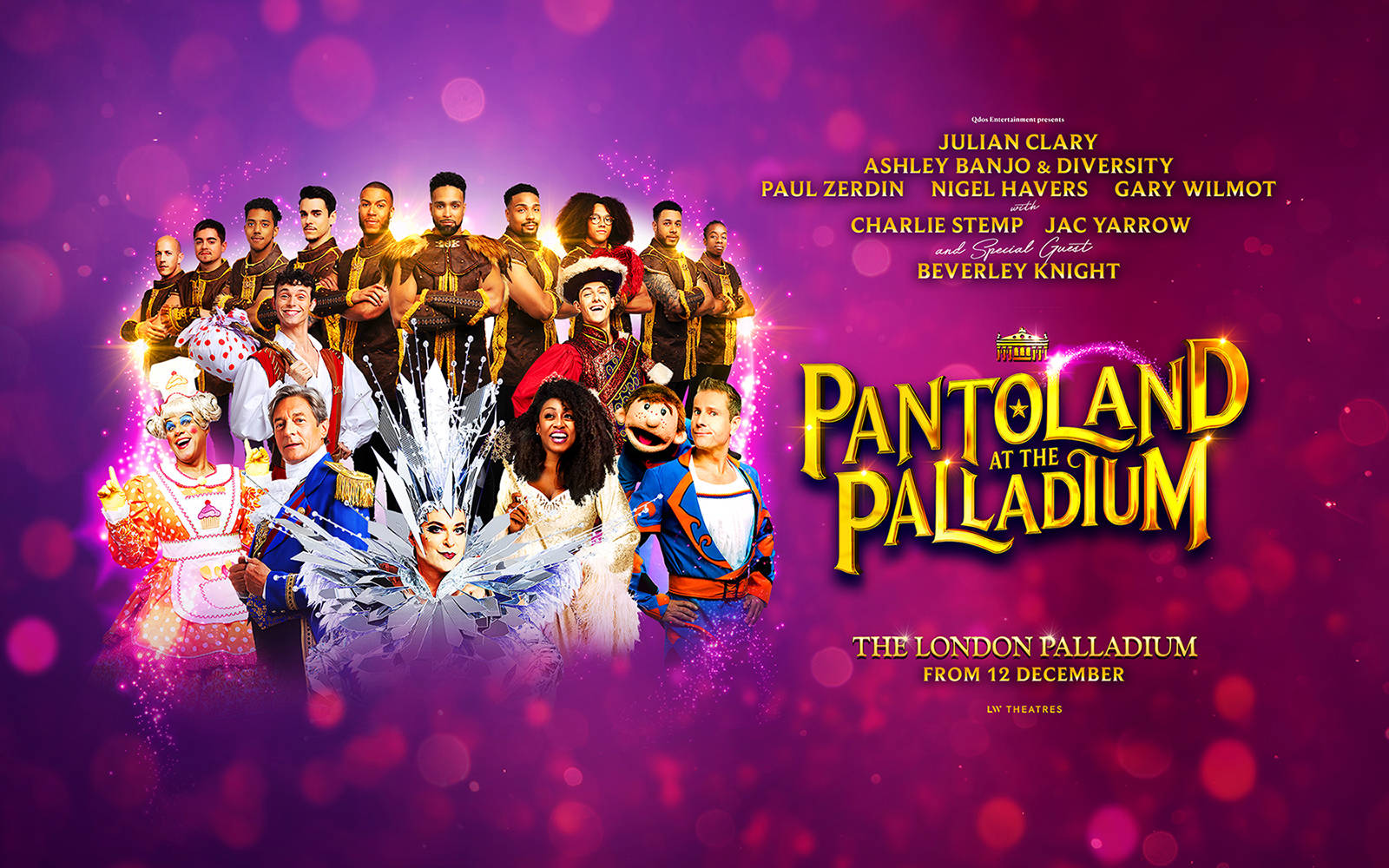 Qdos Entertainment and LW Theatres have today (9 October 2020) announced that this Christmas Julian Clary will take us on a magical trip to Pantoland at The Palladium.  Performances will begin at the world-famous theatre on 12 December 2020 running until 3 January 2021, with tickets on sale from 10am today.

The London Palladium, the home of pantomime, will welcome back panto favourites Paul Zerdin, Nigel Havers and Gary Wilmot, as well as past stars Ashley Banjo & Diversity and Charlie Stemp. Making their debut will be West End sensations Beverley Knight and Jac Yarrow.

Returning for a fifth consecutive year, The London Palladium pantomime has become an essential part of Christmas in the West End, with record-breaking box office success year-after-year. Pantoland at The Palladium, devised by Michael Harrison, will be a treasure-trove of The London Palladium panto past and exciting new surprises written especially for the show, guaranteeing an unmissable treat for panto and musical theatre fans alike.

The production at The London Palladium has been made possible as a result of a creative initiative announced by The National Lottery today which it hopes will enable hundreds of thousands of theatregoers to enjoy socially distanced pantomime this Christmas in theatres across the nation. The initiative will see The National Lottery buy seats that need to remain empty to enable social-distancing, complying with relevant government and public health guidance. By making it viable for theatres to open their doors to the general public, up to 250,000 tickets are expected to be available, with more than 20,000 free tickets available for National Lottery players and the rest to go on sale. This will generate vital income for theatres and help restore jobs – while providing much-needed cheer for panto lovers at Christmas.

Pantoland at The Palladium is the first of a number of productions at theatres across the country to be announced, with further venues to be confirmed in the coming weeks.

Director and Producer Michael Harrison said:
“Pantoland at The Palladium promises to be a spectacular and exciting celebration of this wonderful art form that has been so devastated and decimated by COVID-19.

There is no doubt producing a show of this size and scale is a risk – but it is a risk we have to take. This is not a long term fix, nor a solution to the tragic situation our industry is in, it simply provides a sticking plaster on a very big theatrical wound as we hopefully prepare for full openings in 2021.

As well as bringing our wonderful audiences back, we want to play our part in the rehabilitation of London’s vibrant West End. The production is made possible by the sheer goodwill, determination and courage of so many people – thanks to them over 200 people will now have jobs over Christmas.”

Chairman of Qdos Entertainment, Nick Thomas added:
“I’m delighted that Qdos Entertainment is able to return to The London Palladium this Christmas. Having produced more than 750 pantomimes across the UK over the past 37 years, it would have been unthinkable for us to have a Christmas without the magic of panto. Thanks to our partnership with The London Palladium we are able to give tens of thousands of theatregoers the opportunity to enjoy some very much needed theatrical magic with their families this Christmas.”

Andrew Lloyd Webber said:
“Christmas 2020 needs a Pantomime, and this one at The London Palladium has never meant so much to our industry and our audiences. LW Theatres operates as a not-for-profit and we are delighted that The National Lottery’s support will enable Qdos Entertainment and Producer/Director Michael Harrison to stage this socially distanced production at The London Palladium, alongside many others across the nation.

Opening Pantoland at The Palladium will provide crucial support to struggling restaurants, hotels and other hospitality businesses across the West End, leading to thousands of vital jobs on stage, off stage and backstage.
Since theatres were closed in March, we have spent considerable time, effort and money, making The London Palladium Covid-secure. Using all our knowledge and experiences from around the world, we ran a pilot at The London Palladium for Public Health England and the government to demonstrate that theatres can be a safe environment for our audiences.

By next Spring, our major productions across London’s beloved West End must – and will – be back. I sincerely hope that this pantomime brings a moment of much-needed festive cheer as we continue to fight for the revival of our wonderful and vital theatre industry.”

Chief Executive of LW Theatres, Rebecca Kane Burton said:
“After months of uncertainty, it is nothing short of a miracle that we shall, after all, be staging a panto at The London Palladium. We have worked tirelessly since our first pilot event in July to demonstrate that we can operate The London Palladium safely.

We have all the measures in place to ensure people feel safe, confident and, most importantly, excited to be back with us. Since our first shows in September, we have been blown away by the responses of our audiences. I can’t wait to see the panto lovers back with us for the joyful tradition of pantomime at The London Palladium.”

The London Palladium is an official government pilot venue, working to demonstrate that theatres can open and operate fully within the current coronavirus and social distancing guidance. Performances of Pantoland at The Palladium will run in accordance with a wide suite of health and safety measures (including reconfiguration of seating across the venue and the mandatory wearing of face coverings) that keep audiences, staff and crews safe.

Tickets from £25, book tickets to Pantoland at The Palladium here.