We sat down to chat with 6-time Grammy® nominee Sara Bareilles to chat about all things Waitress – including the London cast, collaborating with Andrew Lloyd Webber and yes, Waitress karaoke. 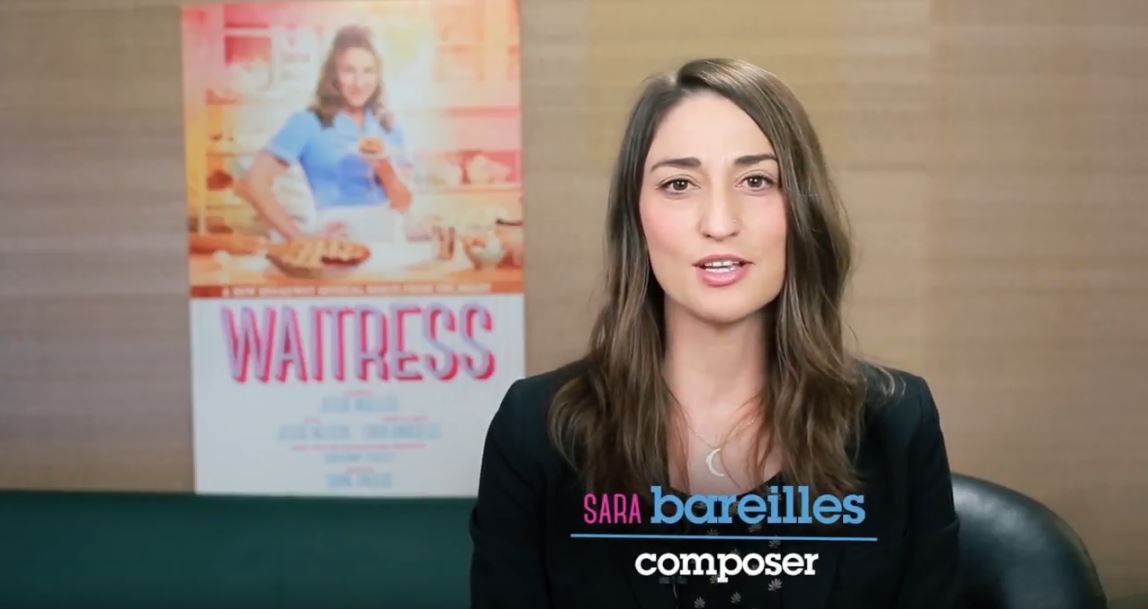 ‘It’s been kind of the most unusual and amazing adventure in my life.  Literally, I categorise my life into before Waitress, and after.’

For those who may not know what Waitress is, how would you describe it?

SB: Well it follows the life of Jenna who is our lead character and an extraordinary pie baker, who is a in a loveless marriage, gets pregnant and doesn’t want the baby. So it’s sort of the journey that ensues from that point on. It’s about her community, and her finding a way to love herself through the love of other people and ultimately through the love of her child.

How would you describe Jenna in three words?

SB: I think it’s all in the lyrics of She Used to Be Mine. She’s messy, she’s kind and tough!

You wrote the music and lyrics for Waitress. Do you approach writing musicals differently to how you would an album?

SB: The biggest difference I found writing for a musical was really about finding my way into the psychology of the characters. I’m really only used to writing for myself, so that was initially a challenge. I had to do what I describe as an exercise in Radical Empathy, where I found my way into each character and gave them dimension and depth, and that’s what we tried to do with the music give them a lot of texture and depth as people.

Do you have a favourite song?

SB: I think its She Used To Be Mine. It was the first song I wrote and it allowed me to peek into what was possible to create on behalf of other characters and not writing for myself for the first time. So that song I remain very indebted to, plus it’s a beautiful song.

What was the most difficult song to write?

SB: Oh the opening number. We wrote that like 22 times, it was a nightmare. I’m very proud with where it ended up, but I kid you not, without exaggerating, I probably wrote that song at least 17 or 18 times.

SB: It just wasn’t working, and ultimately I had to write a brand-new section that didn’t come to me until the final stages. I had a whole different song that used to live there called Down At The Diner and then I went for a 50s doo-wop thing and then eventually landed where we landed, which I ended up loving a lot, but it was a hard won battle.

Can we expect anything different in the West End production, in comparison to Broadway?

SB: Well the show evolves a little bit with each new iteration, and certainly it will depend on casting and who we find to tell these stories. Ultimately we’re trying to maintain the integrity of what we created for Broadway but it’s not without question that things get re-examined, or tightened or tuned. Diane Paulus [director] LOVES a rehearsal process. She likes to get to reopen and tinker so I’m sure there will be at least some slight changes.

Now that you mention it, can you tell us anything about who might be part of the London cast?

SB: We’ve just got into casting, so I have nothing to offer just yet but it’s going to be exciting so watch this space.

We’ve heard rumours that actual baking happens in the theatre to create that beautiful smell, can we expect pie?

SB: I think there’s no way we could show up and not bring some pie, it’s very important. They have a convention oven in the theatre to make that smell and its part of the Waitress experience.

The Adelphi Theatre, where Waitress will open, is an LW Theatre, and you recently starred in Jesus Christ Superstar. How does it feel to be collaborating with Andrew Lloyd Webber again?

SB: Getting to collaborate with Andrew Lloyd Webber in this way is so special because it feels like an organic extension of what has occurred. I really take pride in that, and I’ve always been such a big fan of his. Getting to be in Jesus Christ Superstar, and now host my show at one of his theatres, it’s amazing.

Finally, we’ve seen videos of Waitress Karaoke on Broadway, can we expect to see any of that at the Adelphi? (Pleaseeeee)

SB: I think we have to, right?! It has become a staple. I will really push hard for that! It’s one of my favourite nights of the month in New York. I love getting to go watch, I love to host, it’s nothing but fun.

Sara Bareilles returns with her brand new single Armor, her most poignant, passionate, and powerful statement yet.

Sara performing She Used To Be Mine at the Waitress launch