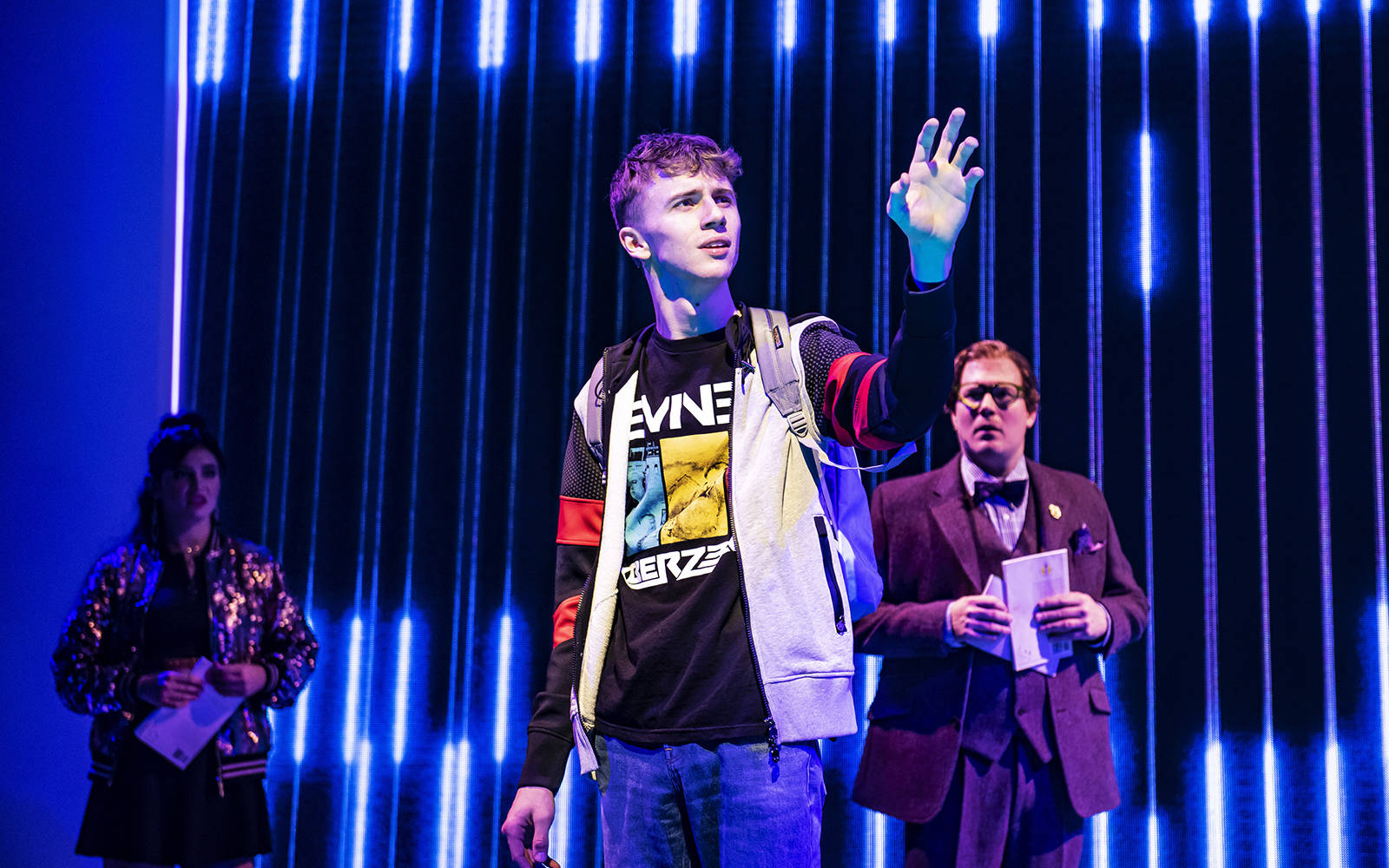 The Other Palace is thrilled to continue our interview series, TOPTalks, where we chat with the amazing talent that comes through our theatre.

We spoke with Scott Folan, currently playing Jeremy Heere in Be More Chill, between shows about playing the role of a lifetime (and find out who his Squip would be)!

From cara_lacoe and @ragincajunboy42: What are some of your similarities to Jeremy? What is the most challenging part about transforming into the role of Jeremy?

I have many similarities to Jeremy! I always wanted to be the cool kid when I was younger, I was very much a wallflower growing up. That’s how I think Jeremy feels at the beginning of the show. Very much on the outside, completely unnoticed by everyone else. This is why he is so taken aback by everyone noticing him in the mall during the song Be More Chill.

The most challenging part about playing Jeremy is the first part of the show for me. I can very much draw on little Scottie for the mannerisms I use to portray Jeremy but that comes with its own setbacks. I have to be very careful to not just play my younger self. I may have similarities to Jeremy but he is very much his own character and isn’t EXACTLY like me when I was in school.

From @getsyncedup: Are there any small details or mannerisms you bring to playing Jeremy that audiences might have missed?

If you come and watch the show again (or you’re coming soon) I’ve really put thought into Jeremy’s mannerisms at the top of the show (and pretty much all through the first half). Second half Jeremy is slightly different but the first half there’s a lot of nail picking and anxiety-driven shaking hands. My posture also massively shifts to create a sense that Jeremy has no self-pride and wants to feel completely unseen even though that is the one thing he fears.

From aimie_boleyn and moses62104: What was the audition process for Be More Chill like? What was your reaction when you got cast as Jeremy?

So my audition process was slightly different to the rest of the cast as I came in quite late. Apparently they’d seen north of 100 boys for the part and had just not quite found what they were looking for. Will Burton, the casting director, then put out a call for some self-tapes to be sent out to the team once they’d flown back to America and mine was amongst the 10 or so that they watched. They then flew over to see me (to check I was a ‘real human’ – Joe Iconis’ words) and let me know that I’d been cast 3 days later.

I wish someone had recorded that phone call from my agent. I was on my stairs (I can quite clearly remember everything about this day) and my agent was in Italy at the time. She said ‘Just a quick one Scott, just to let you know that you got Be More Chill’. I was like ‘WHAT’. Jumping up and down…obviously. I told my mum and dad and pretty much no one else knew until it was officially announced.

From jessicahxpe: What is the funniest backstage story you have?

From insabelh.xx and xkatie_doddsx: How did you get into the theatre industry? Any tips for young aspiring actors?

So I was a child actor. My Sunday morning drama school put me up for an audition for the film Nativity 2 and that ended up being my first professional job. They represented me as my agency for the next 4 years, getting me a role at the National Theatre at 13 and the lead in a Comedy Central sitcom from 14-15, until I found an agent that was right for me. That agent joined ‘Galloways’, which is the agency I am with today. I was a very lucky young boy but I worked very hard.

My dad always says ‘Luck is opportunity meets preparation.’ Meaning, it’s all well and good getting put in front of the right people and getting a great agent but you’ve got to be prepared and have readied yourself to perform in those situations. Auditions are the best practise for this. Go to as many as possible (that are your casting of course!!)

BONUS QUESTION! from je_m_appelle_ and joewoolff: Would you take a Squip? And if you had a Squip, what form would it take?

I would not have taken a Squip when I was younger. I was always very against drugs and I never had any trouble fighting peer pressure because I didn’t really care what those people thought of me. I knew they weren’t my friends so why should I care whether they think I’m cool or not?

However, if I took a Squip now (which I don’t think I would because I’m pretty darn happy at the moment!!) it would 100% appear as Lewis Capaldi. He’s funny, he’s talented and I just feel like I wouldn’t question him if he told me to do something. If you’re out they’re boiio, hit me up (imagine).