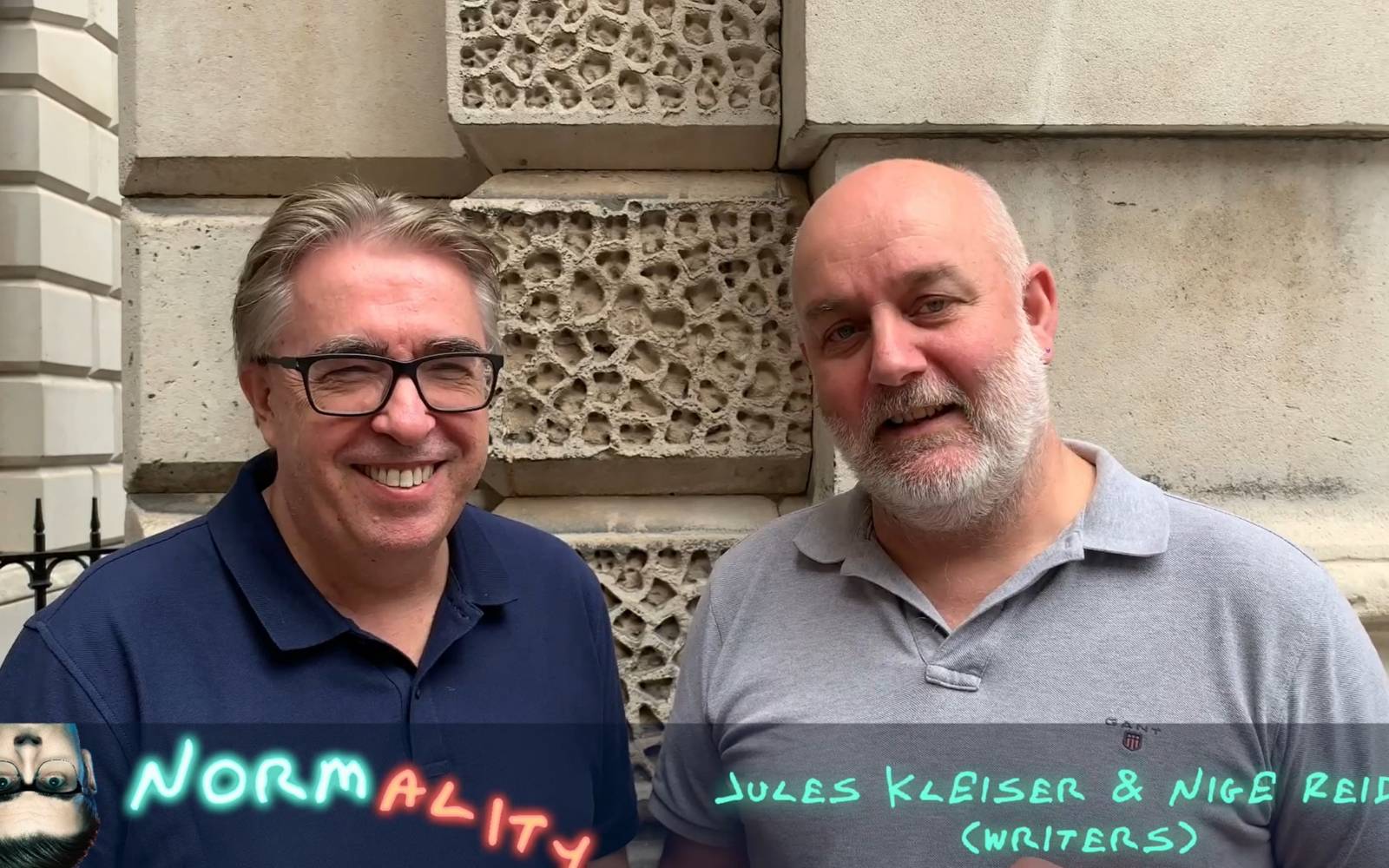 We sat down with songwriters Jules Kleiser and Nige Reid to discuss writing new musicals and the journey of their latest piece Normality which comes to our Studio later this month.

We’re very excited for Normality to open at The Other Palace this month! Can you let our audiences know what to expect from the show?

JK: The show is primarily about our hero, Norman’s, journey of discovery about what is the most important thing in life, which he comes to realise after being embroiled in a big financial scam at work which challenges all his assumptions and aspirations.

NR: Along the way we meet a whole array of larger than life characters who have shaped his outlook from cult leader Arch Druid Trevor, to famous German mathematics Professor Ernst Schnifelburger, to 1970s prog-rock star Ronnie Jupp.

JK: Plus, probably quite important for a musical, the music sounds great! That’s not down to us but our brilliant Musical Supervisor, Patrick Stockbridge, who takes our ideas, does his magic on them and hey presto another big showstopper number!

What has the journey of the show been so far?

JK: We started writing it about eight years ago so it has gone through a lot of changes. The first version was three acts long and the script was about five inches thick so we knew that we had to scale it back. We are mainly musicians and songwriters and have been involved in a number of theatrical type bands and friends were always saying “Why don’t you write a musical?” and so we thought “why don’t we write a musical… that’ll be easy!” having no idea what was involved!

NR: A big turning point was Charlotte Peters coming on board as Director, as she brought in some much-needed discipline to the process. The first thing Charlotte did was insist that we take out all the gratuitous swearing and sex scenes and that alone reduced the script to just two inches thick.

‘Be Someone‘ from Normality

What are you most excited for about this production? Are there any scenes or songs that you can’t wait to see live on stage?

JK: We’ve found it hugely rewarding at previous readings to hear real actors actually deliver what we’d written and so we are really looking forward to seeing the whole piece performed to a live audience, even though it is still “in development”. The actors we are working with are so talented and they just seem to be able to take any simple line and make it sound brilliant to the point that we think, “did we actually write that?”

NR: We like to give the actors full licence to have fun with the characters and go a bit over the top in their performances and so we are also looking forward to seeing what they come up with. A couple of my favourite scenes personally are when two of the main characters get initiated into the mysterious and secret Grand Order. The audience only gets to hear the ominous noises of the ceremony along with the desperate protests of the two initiates. It’s quite an intriguing scene because, even as writers, we don’t really know what happens as it’s all a secret.

How do you approach writing a brand-new musical? What comes first, the story or the songs?

NR: For us, it has been an evolution, we had a very broad idea at the outset but have had to fine-tune it and just keep in what is necessary for the story. There is a real temptation to keep something in just because it makes us laugh or we think is a good song but you have to be quite ruthless to take out anything that isn’t needed, “kill your darlings” as the expression goes.

JK: Certainly the songs come first but the story is very important and the lyrics then have to drive the story. We always listen to feedback and again Charlotte has been a big help. We’ll put in something which might be a little contentious and think let’s hope Charlotte doesn’t spot that one, but she always does and she’s always right!

Could you tell us about your background and what drew you towards your career path?

JK: We’ve always put on creative and fun projects with the main intention to make an audience laugh at the absurdity of things or to challenge a little bit the prescribed wisdom on anything, but without having some kind of deep message.

NR: We’ve had various bands, put on shows at the Edinburgh Festival, toured and we even produced a TV documentary about cold water swimming, so there has always been a lot of variety but the common theme is shining a light on the absurdities and eccentricities of life.

What do you wish someone had told you when you were starting out? Do you have any advice for aspiring writers/composers working on new musicals?

NR: Someone once advised us to just do what we enjoy and not worry about the making money side of things and in that respect, we’ve always been very successful!

JK: My advice to a songwriter is to simply know when it’s finished. The first version of anything is never the final version and you have to allow it to marinade and settle, but if you keep tweaking and changing you’ll lose the magic.

Finally, can you describe Normality in just three words?

Want to be the first to experience this brand-new musical? Normality comes to The Other Palace Studio from Fri 13 to Sat 21 September. Tickets from £10. Find out more and book yours here.